We are a group of passionate MYM shareholders who are very concerned about the proposed transaction as we believe it will be devastating to MYM shareholder’s investments. We have compiled all the details of the deal for you to look over and decide for yourself. The MYM Shareholder Group has already compiled a significant amount shares for voting against this transaction.

The MYM Shareholder Group believes that the transaction dose not provide MYM a fair valuation and has deep concerns with the viability of IMCC. IMCC has a very high valuation unsupported by financials while MYM with fantastic financials is very undervalued.

MYM Group believes that MYM undervaluation is due to lack of managements knowledge of public markets and absence of investor marketing. Management will need 66 2/3% of votes casted to pass.

Everything about this transaction does not make any sense.

For 3 months MYM share price has been slowly rising and heading in the right direction, but Management put an end to the rise in share price by announcing a takeover bid at below market value. This tanked MYM share price.

Offering 19.5 cents when the share price is at 23 cents is an absurd move and highly unusual in any takeover offer. How is this in the best interest of shareholders? We all need to question managements motives!!!

Who’s behind this deal?

Howard Steinberg is not only “MYM Chairman of the Board/Director” but also a “Director of IMCC company Trichome Financial”.

There is serious potential for abuse of power and persuasion here as Mr. Steinberg has a lot to gain by bringing MYM into the overvalued IMCC fold. A serious point to consider.

Further concerning is that the overvalued shares of IMCC have dropped over 48% just in the month of March and continue to fall. Meaning that the 19.5 cent offer is already much, much less due to dropping IMCC share price.

We believe that the board of directors of MYM has acted, with reckless and wanton disregard for its shareholders, and we hereby demand that the board move immediately to open up the sales process by auctioning the company to the highest bidder.

The MYM Shareholder Group objects to both the process and the price” of a combination with IMCC. The shareholders believe MYM’s management of making “no attempt” to “shop the company or even check the market”.

MYM Nutraceuticals and its prize subsidiary Highland Grow have proven they’re profitable and that’s rare in this sector. MYM Nutraceuticals, a Canadian marijuana company with near nationwide distribution and impressive sales growth. Sales increased from Q1 2021 sales of CDN$1.35 million to Q2 2021sales of CDN$4.1 million, equating to a over 200% increase from the previous quarter. Q3 sales are due to be reported and are expected to be a similar increase as previous quarter.

Below is a comparison of similar marijuana companies and their fundamentals.

As you can see by comparing MYM to other marijuana companies, MYM is in FANTASTIC financial shape and the share price is very undervalued, meaning there is a lot of up side!! The IMCC offer is ridiculously low and is not fair nor does it make any sense for MYM shareholders.

Because IMCC closed at C$8.89 on announcement, the 0.022 conversion gives the C$0.19558 value. When IMCC share price drops so does the value to MYM shareholder, We will be getting shares that are devaluing. IMCC share price continues to fall.

If IMCC shares fall to $4.45, MYM shareholders will in effect be only getting 9.8 cents per share. A good question is … Is this possible?? Lets look at IMCC closely.

For starters, don’t let the current price point of $7 per share on IMCC fool you into thinking that it’s somehow shot up over the past year, as this price is directly the result of a 4:1 share consolidation done in mid-February in order to meet Nasdaq minimum price requirements to list shares on the NASDAQ. 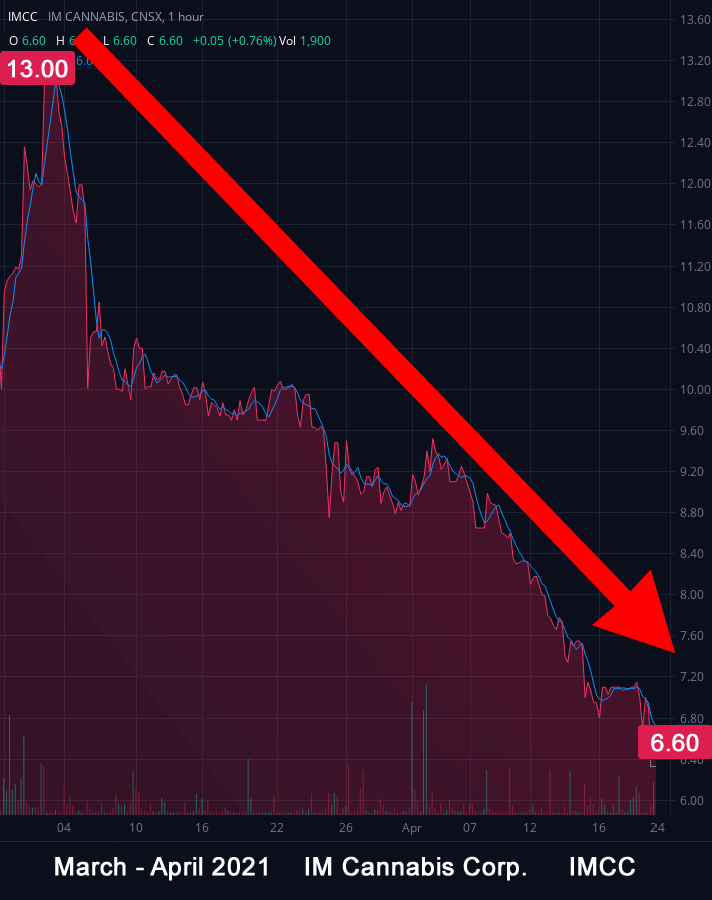 Since the company’s listing on the NASDAQ and share consolidation the stock has been spiraling downward – Down over 48% in the last month since March 3, 2021. If this keeps up IMCC will risk NASDAQ de-listing.

As IMCC share price continues to drop – so does MYM shareholder value. This chart shows what you will get per MYM share in value. MYM stated you will get 19.5 cents BUT NO LONGER.

Everyday this deal gets worse for MYM shareholders – today the deal is only 15 cents per share – A 35% DROP SINCE THEY ANNOUNCED THE OFFER when MYM was trading at 23 cents.

The chart below shows what MYM shareholders will get as IMCC price crashes.

That said, it’s beneficial to begin by viewing their valuation as a whole, and questioning how a company that last reported only C$39.7M in total assets, net income of only C$738,000 in the 3 months ended September 30, 2020, and a net loss per share of C$0.06 over nine months ended September 30, 2020. The market capitalization of $410.77 Million CDN of IMCC is unsupported by its financials.

IMCC is currently trading at 40 times Net Revenue. Obscene by any standard. The offer to MYM is 2.3 times revenue.

Thus this valuation appears very much to be a distortion of reality. It includes a brief 3-day period of trading that was above $11 per share, as it took that long to come back to earth. The stock hasn’t seen $13 per share since March 23rd—and given the company’s public financial statements and valuation, this is unsurprising.

THE CASE FOR A “MIRAGE“

According to IMCC’s latest financials as of September 30, 2020, their total equity was only C$30.3M.

Therefore, with the information that’s currently publicly available, it appears that at just 30 million CDN total equity (as per page 7 of their latest condensed financials) that represents less than 7% of the current market cap of $410.77 Million CDN.

Perhaps more concerning are the risks mentioned within the company’s own Management’s Discussion and Analysis (MDA), in particular the potential for a problem with the company’s ownership structure over its Israeli cultivation arm Focus, which could be risk of being “in contravention of Israeli rules restricting the ownership of Israeli cannabis cultivators and thereby jeopardizing Focus’ cannabis cultivation license.”

IMCC reported total equity of US$24M represents less than 7% of the current market cap of US$355M.

Should it be determined that the company is in contravention of Israeli rules, IM Cannabis Corp itself describes a scenario that may adversely affect their ability to conduct sales and marketing activities, and ultimately have a material adverse effect on the company’s business, operating results or financial condition—Under the section labeled Ownership of Focus on page 30 of the MD&A.

Quote “There is a risk that regulatory authorities in Israel may view the Company as the deemed owner of more than 5% of Focus in contravention of Israeli rules restricting the ownership of Israeli cannabis cultivators and thereby jeopardizing Focus’ cannabis cultivation license.”

IMCC could be in contravention of Israeli rules restricting the foreign ownership of Israeli cannabis cultivators and therefore could lose their cannabis cultivation license. Effectively ending the company’s business in the Israeli marijuana sector.

Why? because to hold a Israel Marijuana license you are not allowed to have more than 5% foreign ownership. And they have much more than that!!! Meaning it can be taken away at any time when the authorities realize this. This is insane risk.

Further, we found that IM Cannabis Corp. has attracted many legal challenges. Not one, not two, but four lawsuits.

Lawsuit Three: On October 23, 2019, a lawsuit (T.K. 32304-10-19) was filed directly against Focus, alleging it had breached its obligation to provide medical cannabis to the claimant in accordance with the license “due to mismanagement” (page 25).

Lawsuit Four: On October 30, 2019, Focus was served with a Motion for approval of Class Action T.Z. 31805-10-19 against the Medical Cannabis Unit in Ministry of Health (MCU) and five other companies related to the cannabis market in Israel (page 25).

“These class action lawsuits have the potential to severely damage the company and it’s profitability.“

BUT IS IT OVERVALUED?

How then does IM Cannabis (NASDAQ:IMCC) (CSE:IMCC) compare to its peers in the US$100M to US$500M range? Take for instance, The Valens Company Inc. (OTC:VLNCF) which is the closest in market cap, at CDN$410.7M.

Going back to the equity vs market cap argument, IMCC’s last financial report only accounts for 7% of their current market value of $446 Million CDN, whereas at least Valens can account for 40.5% of its $410.77 Million CDN market cap.

Lets compare IMCC to other marijuana companies with others with even lower market capitalization’s and compare Revenues and EBITDA:

As you can see from the data above, IMCC’s market capitalization is not at all supported by its financials. IMMC looks like the industry 5 years ago when nothing was based in reality. Those days are long gone.

Even when considering the addition of value from the Trichome Financial merger earlier this year, the numbers just don’t add up.

So even when accounting for the additional assets of Trichome, the combined total of US$61M still only accounts for 17% of IMCC’s current market cap value.

After the market has already learned from the mistakes of the past, during the Wild West years of legalization, it’s surprising that similar mistakes are being made today.

Unlike Valens and many others, which have established its base in Canada where pot is legal, IM Cannabis is only established itself in Israel where recreational legality of the drug is still up in the air.

Even more troubling is the Deadlocked Israel elections. Near-complete results from Israel’s fourth snap election suggested yet another stalemate, with Benjamin Netanyahu scrambling to cobble together a coalition by partnering with extreme nationalist, hardline religious and far-right parties. This election deadlock will force Benjamin Netanyahu to make deals with these parties to hold on to control. Deals where marijuana is harshly opposed by some of these groups.

Now he’ll only be able to form a new government and return as Prime Minister if he’s able to cobble together a coalition — and that’s no sure thing. No one knows what the outcome of legalization will be with such election uncertainty. IM Cannabis (NASDAQ:IMCC) (CSE:IMCC) is at serious risk of this political instability, which could risk their business in Israel.

WE MUST EDUCATE SHAREHOLDERS AND STOP THIS TERRIBLE DEAL !

Groups to chat in:

The above information is for informational  purposes only and should not be considered financial advice. Do your own research and verify data, statements and information for yourself.

RottenTomatoStocks.com a site that features overvalued stocks.
You can read their full article here:
https://rottentomatostocks.com/imccs-high-valuation-cant-fool-cannabis-investors/

File your request to receive more information about this action.